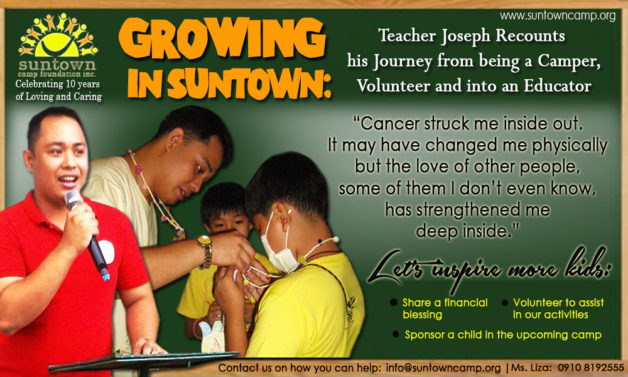 ”Lord, kinse pa lang ko mapatay na ko?” This was the question Joseph silently uttered when he was diagnosed with Osteosarcoma or bone cancer. He described his ordeal as “scary” right from the time his thumb was amputated until his chemotherapy and radiotherapy. He felt sick just by seeing needles and medicines being prepared before his very eyes for each treatment session. His ordeal was aggravated by frequent trips to Iloilo for radiotherapy and missing classes for most of his treatment period. All these lightened up when he joined Suntown Camp as a camper in 2007.

Participating in the first camp, he met other kids who have cancer and realized that the big C does not look upon status in life, age, gender or faith. He learned that cancer can afflict anyone and experienced that happiness and love can alleviate pain and sadness. The joy, warmth and inclusiveness he felt in camp made him resilient. When he was declared cancer free during his college years, he wasted no time in signing up as a volunteer leader with his classmate, girlfriend and now his wife. “Being in the other side of the spectrum is another life changing moment for me.” The campers gave him hope and inspiration to share what he has with others.

Joseph is now a full fledged teacher. What he learned in Suntown both as a camper and as a volunteer has made him a loving and feeling educator. He is very grateful that Suntown has taught him endless educational experiences that is of good use to his students. His Suntown experience did not only develop his teaching methods, but also provided him a significant boost in his sense of responsibility and self esteem. Now that he is a father to two adorable boys, he is teaching them the values of compassion, patience and the power of prayer he learned in camp and the volunteers.

On the 10th year anniversary of Suntown Camp Foundation, Joseph and his wife together with their two kids, are ready to go back once again to the sunny place that has been a big part of their family life. Joseph is ready to share his story of healing to the new campers.

Cancer struck me inside out. It may have changed me physically but the love of other people, some of them I dont even know, has strengthened me deep inside.

For Joseph and his family, Suntown will always be a place where the sun never sets for children and adults alike. 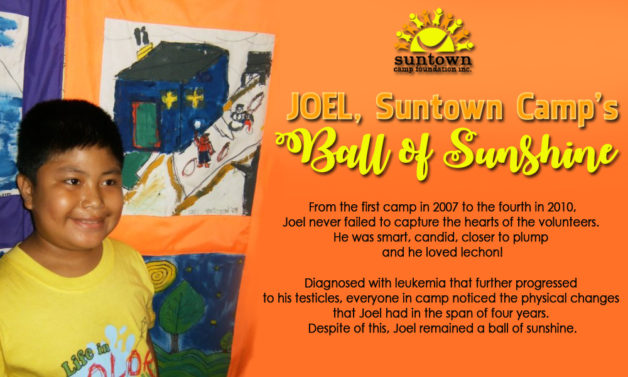