These were among the wishes of 26 children either suffering from serious illnesses or have parents with cancer at the four-day Suntown Camp held at Balay Kalinungan in Bacolod City that ended Sunday.

At the camp organized annually by the Suntown Camp Foundation, the children are taught to cope with their illnesses, bond with new friends, and have the time of their lives.

Dr. Alvin Parreño, camp director, said this year?s campers were not only those with cancer, but also those with other serious illnesses such as juvenile diabetes that deprives many of the chance of reaching adulthood.

And for some of the children, coping with their illness has become even more difficult because of their parents? lack of resources to buy the medicines they need, he said.

Angelo Pagayon, 11, an altar boy from Victorias City who has dreamt of becoming a priest, has leukemia. His father, Danilo, does not have a steady job and has had difficulty raising funds for Angelo?s treatment.

But somehow when it is time for yet another chemotherapy session, the money just appears, Danilo said.

Perhaps it is because Angelo, who leads the daily prayers at their home, is close to the Lord, his father said.

“At the camp I learned that even if we are sick we have to be happy,” Angelo said.

While Suntown Camp is for children aged 8 to 18, this year an exception was made for Angel Javines, 20, of Silay City who has a polycystic kidney with diabetes.

Polycystic kidney disease is a genetic disorder characterized by the growth of numerous cysts in the kidneys.
Angel, who is about to complete an engineering course at the University of Saint La Salle, could be mistaken for a 12-year-old.

At a session during the camp, the children were asked to draw what they wished for and Angel drew a kidney. But despite her trials, Angel, like Angelo, has not given up on God.

In a letter she wrote to God during the camp, Angel said: ?Thank you for all the trials in life that I know, with You, I will pass. Sorry for all those times that I almost gave up and for asking why these things happened. Thank you for giving me enough courage and strength to face this hurtful yet happy life, (and) for giving me the best parents.?

Brillegem Allones, 9, of Cauayan town has juvenile diabetes and on Saturday night during the camp, her fellow campers thought she was possessed because she was delirious. She was suffering from hypoglycemia but after being rushed to the hospital for treatment she returned to the camp for yet another day of fun.

Parreño said Brillegem?s parents have had difficulty raising the money to buy her insulin so sometimes she has had to go without.

Osteosarcoma or bone cancer has also caused Rena Jenn Zulueta, 9, of Hinigaran, and Metos Lachica, 13, of Pontevedra to lose one leg each.

When they arrived at camp, volunteers had to help fix their heavy wooden crutches that they had outgrown to help them get around.

On graduation day, they were surprised with new aluminum lightweight crutches given by camp organizers that caused Metos to cry with joy.

Metos said she enjoyed the camp because she made many new friends and learned to understand the feelings of others, too.

On Saturday night, the campers were bused to Sugarland Hotel where members of Assumption Class ?65 and their friends threw them a surprise party and carnival complete with a clown, magic tricks, games and prizes, gifts, a chocolate fountain, cotton candy and lots of food.

Even the frailest of the children joined in the fun. Jan Gabriel Garcia, 11, of Talisay City nearly did not make it to the party because he felt too weak to go and thought that he needed to go home.

But John Gabriel, who has leukemia, somehow mustered the strength to get on the bus and, by the time he got to the party, joined in every game.

Justine Maeve Guillermo, 10, of Talisay City who is suffering from rhabdomyosarcoma, a malignant tumor of the skeletal muscle, and who is confined at the Corazon Locsin Montelibano Memorial Regional Hospital in Bacolod City, did not make it to the camp because her doctors said she was too ill to go.

But her wish for a Barbie doll was granted five times over. People who heard about her plight brought her five dolls, books and other toys.

Her father, Gaspar Guillermo, a security guard, said he was thankful to all those who have helped bring some happiness to his daughter at the hospital.

“At the camp we try to give the children the joys of childhood they normally do not get,” Millie Kilayko, Suntown Camp president, said.

“The camp allows the children to understand and accept their situation, express their feelings, and see that they are not alone in their struggles. They spend time together with children sharing a similar journey, in a fun, healthy and loving atmosphere.”

The children make new friends at the camp and discover new interests within a community of caring adults who provide them needed attention to boost their self esteem, Kilayko added.

Suntown Camp Foundation also organizes support group activities throughout the year to help the children and their parents cope, she said.

The camp is run by volunteers and relies on donations from the community. To help the children and many more cope with their life-threatening diseases and find happiness, the foundation continues to welcome support from the community. 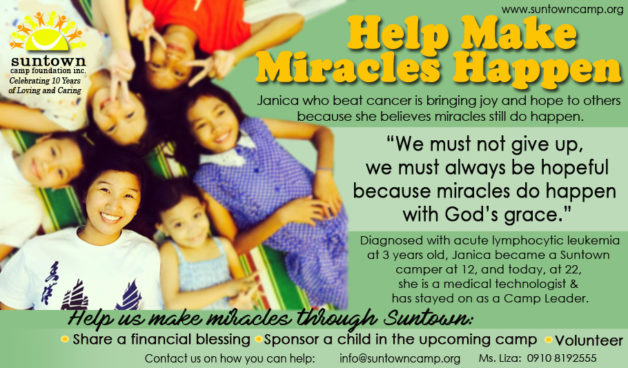 August 30, 2017
A 22-year-old who beat cancer is bringing joy and hope to others because she believes miracles still do happen....

May 5, 2012
Volunteers of Suntown Camp Foundation, a Negros-based NGO for children with cancer and serious illnesses, mounted their own Read Along....